Have you heard by now that an Easter egg hunt sponsored by Pez was an epic fail, thanks to some thankless parents in Connecticut?

Here are the Top 5 Reasons these parents should go to Pez Prison for being such lousy parents:

5.  They can’t follow directions– you are not supposed to go until the officials tell you to.  How frustrating is it when your own children don’t follow your instructions?  But how can we expect children to pay attention to rules if adults can’t?

4.  They have poor impulse control and lack patience– The number one predictor of successful adults is if children are able to delay gratification.  I constantly give my children opportunities to self soothe and learn to wait gracefully to get what they want.  I guess these parents never got that lesson… neither will their children, I’m guessing.

3.  They helicoptor over their kids’ event– In one of the comments on a Facebook rant over the event, someone made the very good point that adults aren’t even supposed to be on the field!  The normal protocol is to hold back your kids until the officials give the green light and then encourage your kids from the sideline.

2.  They claim no responsibility– After the horrible debacle, Pez received the blame by many.  I’m guess the ones who had the audacity to shame Pez were the same ones to “bum-rush” the hunt.  That whole “not me” attitude is nothing short of narcissistic.

1. They model bullying behavior– Four-year-olds had broken baskets and bloody noses.  Really???  Pretty much says it all…

There’s GOT to be someone who took a video of the event with a cell phone.  I for one would LOVE to see that turned over to the police and arrests be made.

I want to see mug shots of horrible parents, caught in the act of pushing little kids, knowing they are now having to defend themselves from charges of assaulting a child.

Even as bad as what happened to the traumatized kids, they at least have parents who were the rule followers.  Their parents will most likely run to their children’s side, calm them, and turn this into a lesson.

Know who’s really out of luck?  Those poor kids whose parents were the culprits.  They may have scored a basket full of Pez on Saturday, but they don’t have a fighting chance regarding positive parental role models.

Make it your #153Promise to always be on your best behavior for your children’s sake.

Once again, I come downstairs (7:30 am is sleeping in for a teacher) this Sunday morning, sign onto my Facebook with a cup of decaf (I’m contemplating going back to high test, but that’s another topic), and find posts of proud mommies with the Easter baskets they made for their kids. But not pics like this:

When did Easter get to be another opportunity to over indulge and keep kids in Entitlement Mode?

Last I checked, Easter, is NOT about a bunny; it’s about Christians celebrating the resurrection of Jesus, whom they accept as their personal savior.

I am a purist when it comes to religion; it really irks me to see the origin of a holiday take a back seat to consumerism and nonsense that has nothing to do with the spirit of the day.

It’s as if every time I see a giant bunny rabbit with a bow-tie handing out plastic eggs with candy, I get this vision of Jesus on the cross, clearing his throat and saying:

Psssst…  Hey, you… yeah, YOU!  The one with their kids slamming jelly beans and hunting for eggs?  I’m dying’ over here!  Like, literally!!!  Remember me???  It’d be nice if you do me a solid and mention to your children that I’m the reason why you’ve got this whole basket gig on Sunday morning…

Children benefit from learning about customs and family traditions; it gives them a sense of belonging and identity.  But that’s only if they understand the meaning behind the actions.  Otherwise, the effort put into making all those goody baskets is all for naught.

So please, if you go through all the work to assemble gifts or other activities for this HOLY-day, make the same effort to teach your children the true definition of Easter- church service, and all.  Otherwise, what are they really learning from you?

Make the #153Promise to educate your family about your religion so they don’t turn to worshiping the wrong god of consumerism. 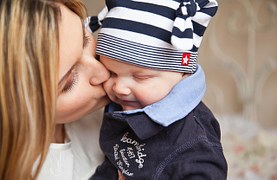 My book adventure continues to pick up steam!  Click HERE to read more about my most recent developments in my “One Million Kisses” saga, in addition to getting #153Promise off the ground.

In this entry, I highlight more interaction with my publisher regarding branding me as an author and the work my husband and I are doing to turn this blog into a legitimate nonprofit organization!

As I stated in the update: No wonder why all those male authors are always so moody- it’s the closest thing they’ll ever get to giving birth! ; )

Here’s a Parent Proof Plan on how to decide whether or not your child is legitimately sick, or just has “Testitis,” a sudden case of dread due to an exam.

END_OF_DOCUMENT_TOKEN_TO_BE_REPLACED

No, this isn’t some quirky post where I twist the title around… I really mean that no parent in their right mind should allow the following five activities.  The stakes are just too great.

So how to enforce these rules?  Tell your kids that you love them and want what’s best for them.  Let them get upset- especially if these rules are coming from out of the blue.  They may pitch a fit, whine, cry, “hate you,” roll their eyes, or give you the silent treatment… or a combination.  Don’t cave in.  Ride the storm.  Eventually, they will calm down.

And just remind them that there’s a difference between a “NEED” and a “WANT.”

You’re the parent; only YOU can be their protector.  Make the #153Promise to be the responsible one!!!

*Thank you to Dr. Leonard Sax for his talk last Sunday for emphasizing the importance of some of these issues!

Please read the highlights of my most recent phone conversations with my publisher here in my Writer’s Journal.

There’s no way I’d be getting so much attention from a larger publishing house.  We brainstorm, he challenges me, and I’m leaning a lot from him.

While I still dream about one day signing with a larger company, having an agent, a publicist, and all the other trappings of a famous author, I can honestly say that I don’t know if I know enough about the industry yet.  I’m enjoying learning all of the aspects of what it takes to create a book, promote it and get it into the hands of the public.

Hopefully, you’re learning something right along with me, too!  : )

You know the saying that if you put something out there into the universe, it will come back to you???  Well, I spoke on the phone to my publisher again last night.  I know, right???  (I will update the results of the conversation in tomorrow’s post.)

It’s all coming together… I can feel it…

END_OF_DOCUMENT_TOKEN_TO_BE_REPLACED

If the President of the United States is the one in charge of our country, wouldn’t it make sense to see how good of a job they did being in charge of another human being?

What if we paid less attention to all of the back biting at the debate podiums and started paying attention to how their kids turned out?

I’d love to see the KIDS of the candidates be interviewed…  What are they doing now?  Who would refuse to speak?  Do they show signs of coaching?  How do they react to a curve-ball question?

So if this reaches anybody in the media, I pose this challenge: ask the candidates’ kids what their childhood was like and how they think this would translate into what kind of nation we would have if their dad (or mom!) were to become president.

I’ve been a lot more vocal, bold… brazen, even… when it comes to getting the word out regarding my book, “One Million Kisses.”

I’m a lot more courageous now that I can say, “I have a book coming out next month.”

I’ve been keeping a (albeit loose) journal on the progress here.

Please stop by to read about my most recent updates.  For a while, it was the “Hurry up and wait” approach, but I think it’s going to increase with some speed now that the hard copies are just weeks away.

Make it your #153Promise to keep checking back to find out when you can finally get your hands on this little labor of love.

The last hour of the Stress Workshop I attended was supposed to be a Q and A about how to best address stress with you children once it rears its ugly head.  I was looking forward to learning some tips and maybe even some proactive strategies.  It didn’t happen.

Instead, these were some of the questions that parents asked:

You see the pattern?  These weren’t actual open ended questions about how to HELP their kids; these were actually complaints disguised as questions.